Saturday/Sunday September 12 & 13 Please stop by studio 10 and come see the new work I’ve put together for your entertainment, and to take home with you if it strikes your fancy. (What is a “fancy” anyhoo?)

I will be at my own Flying Redhead home studio along with Robin Westbrook, faboolous jewelry maker. 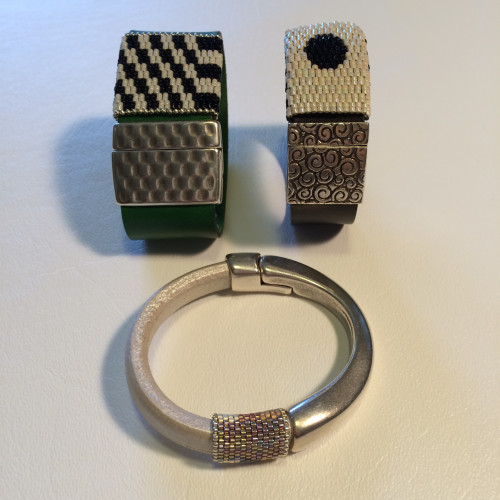 The tour map is available on the website along with info about all the other fine artists and studios on the tour! 11 studios, 37 artists!

Saturday/Sunday September 19 & 20. Please stop by studio 14 and say hi! I will be at  fabulous print artist Mona Smiley Fairbanks’ home studio along with Robin Westbrook once again. It’s more fun when you get to spend the weekend with peeps you like!

I’m bringing new work, many smaller sized pieces, and matted studies all for viewing and purchase, as well as some new 3D figures I’ve been having a great time making. It’s all fun, and I’d love to see you!

Parking should be easy enough in both locations, and there will be signs pointing the way. Please download a map of the Edmonds tour here and be sure to check out the other artists on the tour website — there are some fascinating folks!

Art Walk Edmonds Preview at ART Spot
There will be a little preview of the tour at ART Spot on Thursday September 17 from 5-8PM for the Art Walk Edmonds – AWE. I’ll be there with one of my sculptures along with many of the other artists on the tour. It’s the only time we see each others work!

Oh Oh Oh!
One of the fun things we did last year and this year was artist interviews — here’s a link to mine wherein I answer “What does it mean to be human?” along with other intriguing questions.

I’ve often thought there was a story behind many of my paintings and collages, but I seldom wrote them down.

I recently read about and purchased a book, Significant Objects, 100 extraordinary stories about ordinary things. The idea behind the book was that narrative adds value. And while they were using monetary value as their metric for determining the “value,” I have always liked the idea of adding narrative to visual art. It’s not that I think the art won’t stand on it’s own without the narrative, but that cross pollination of art forms, writing and visual art, allows for a fuller experience.

So when applying for the Kenmore Art Show coming up in June, there was a space for 200 character description, rather than describing the technical process or materials used, I got started thinking about the the story. 200 characters is a challenging limitation, but also freeing. Here are 4 pieces that got short (nearly microscopic) stories. 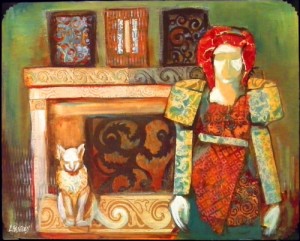 The cat has come to visit our warm fire-lit living room. As a highly domestic cat, she fits right into our highly domestic setting, even as far as curling her tail into our couch’s Greek wave motif. 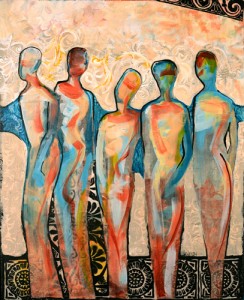 The play’s the thing, and these five were cast as the chorus in a Greek play. I hope it’s a comedy. Remember, there are no small parts, only small actors. 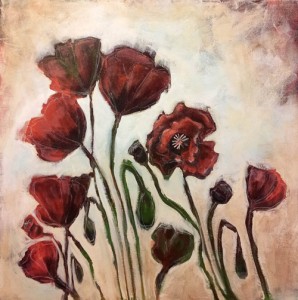 Poppies have an attitude. They rise up and stand tall, and then sport their wilty petals — proud and sorta wimpy all at the same time. Sometimes a flower just demands to become a painting. 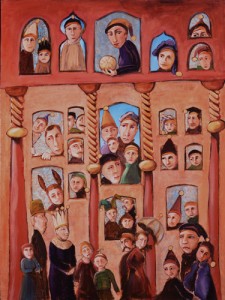 Ah the grand parade of people who peer and parade, who scoff and snicker, who look and linger, who query and quickstep along the promenade, and then there are the people who watch. 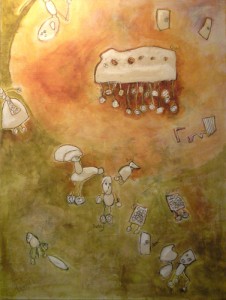 The cast: Girl, Daddy, Bird, Couch, Legs, Chair, Door. I was a 3.5 year old girl, dancing and swirling with the artist Joan Miro, who stayed just behind the curtain off stage right. The first in a series. What fun!

Breakin’ the composition rules, and still winning. This painting by Edouard Manet has two strong circle shapes side by side, almost centered, which is generally not advised for a great composition. Then add a strong line going off the edge of the canvas — whoosh — eyes are in danger of leaving the picture. Yet a subtle pair of stem snippers at the left pulls eyes both off to the left AND back in, and the even more subtle table top/horizon line brings eyes back to the center and the subtleties of shading in the flowers.

Next big show coming up is NEAT Seattle, a studio tour. I will be a guest of Sandy Spear, and Priscilla Peterson will also be with us. Sandy makes glass beads, and jewelry from the beads, and Priscilla makes wearable art clothing. Looking forward to sharing the tour weekend with these two lovely women! December 5-7, 2014

I will bring more of my new 3D figures “The Actors,” the “Headstones,” some smaller paintings and collages and matted prints for gift giving. Great time of the year for purchasing totally unique gifts!

Another grouping of people this one strikes me as a Greek chorus. I like this working fast thing. Of course, I’m working on completing some that I started, so the ones that I start from scratch may take longer than a day. Nice to finish up some paintings though!

Here’s the first of my paintings for the 30 in 30 challenge. Maybe it’s even done!

Attending the Wintergrass Bluegrass festival 2014 yesterday brought a few new musicians into my attention. When I like a band it’s usually for a few reasons, 1. fun to watch, inspiring to listen to; 2. I would like to do some of their songs; 3. I would love to make art while listening to their music.
How do the art and music puzzle pieces fit together? As an artist and a musician I spend time actively doing both, and it seems that when I concentrate on one, the other suffers. Or maybe I will turn that about and say that there is a season for each — there is time to move forward with art, and a time to learn new music. I think they are not exclusive, they both feed the same creative mind and build up each other.
Some people say they can see sounds and hear color.  Few of us are synesthetic, but for most, music and art convey emotion, say ideas, and can bring us along into a mood or story. One band yesterday (Milk Carton Kids) sang a single line that sticks with me, “Our young hearts grow old.” One line offers a powerful and lyrical image and brings it to the people witnessing the words along with the tune. It brings a hush. And how does that bring us into the art studio? Sometimes silence is preferred as it turns the creative switch over to the on position. Sometimes singing along greases the inventive cog. Sometimes wordless music is the thing, sparseness is appreciated and one can find visual creativity in the quiet chinks in the music. Sometimes a wall of sound will release an inner monster to overcome.  Most often a quiet mood works best in my studio.
Music quiets the brain of other concerns, focuses on the work at hand. Musicians might prefer that listeners listen intently, but here’s where familiarity can cause inattention – allowing focus on other creative pursuits. Still the music is appreciated as time flies by.
Where does your attention go in the creative mess? “There are no worries, you can clean up later,” is part of my self talk. Let’s see what happens…make mistakes…lay down the paint on canvas…what you do is not wrong.  Are you using a brush without rinsing? Well good, not rinsing makes some beautiful mother colors to tone paintings and make beautiful shadows. Not following a pattern in music can cause something called fusion – often enough it’s a happy surprise. How do you get a mother color in music? Find an unusual transition between major chords with a minor 9th/added 11th or something even better to surprise us. What does a harmonic look like in painting? I wonder.
Art for me is mostly a solo pursuit. When working solitarily, it’s important to have good self talk. Music can help. Be kind to yourself. Exhibit a little kindness. State your intention, colors, a feeling, a brief description. Be curious about the outcome rather than attached to it. Play some music in your studio and practice joy.
New musical discoveries:  Väsen, Chris Thile and Mike Marshall, the Milk Carton Kids.

Part of this summer I have spent learning some new ways to make art.  Recent viewing of DVD workshops by Anne Bagby and Carla O’Connor led to some of my new work, pictured in process here. I have appreciated Anne Bagby’s work, and even own 3 tiny works of hers. Her highly patterned, intuitive process matches and inspires my heart for layering materials and mixing patterns to create interesting surfaces. It’s akin to some of the work I did in fabric as a costume designer.

Carla’s instruction is interesting to me, and watching her go through the process of a painting has encouraged me to let go of some ill conceived wish for perfection…I know better, but it creeps in. Carla works in gouache, and I work in acrylic and collage, but many concepts and processes apply.